The world often follows the law of unintended consequences. Institutions are formed, laws are passed and processes implemented to remedy some pressing problem, only to find some new, wretched misfortune come crawling from its structures. We can see this in finance, where the well-intentioned risk-weighted capital adequacy ratios of Basel II encouraged banks to create ever more elaborate synthetic securitisations which ended in global financial catastrophe. We can even see it in my profession – academia – where Thatcher’s Research Assessment Exercise (RAE) (now the Research Excellence Framework ‘REF’), was expected to rectify a perceived lack of quality and productivity in the research output of the university sector. The result – arguably – is a homogenisation of output and soar-away wages at the top as academics willing to play a mercenary REF game pit employers off against each other, with uncertain outcomes for the collegiality and cost control that have traditionally held those institutions together. Paraphrasing Chris Dillow, Thatcher’s vision was of a diligent and creative University sector exercising moral restraint: she wanted universities staffed with people like her father. She got universities with people acting like her son.

But the topic of this blog is not finance or academia, it is football. And football represents another good example of unintended consequences. In 1991 when the big 5 clubs (then - Manchester United, Liverpool, Arsenal, Tottenham Hotspur and Everton) were approached by Graham Kelly of the Football Association (FA) to form a breakaway league, it was done on the promise that fewer games would lead to higher quality football, which in turn would encourage new money from TV and sponsors. It was anticipated that this would stabilise the financial position of clubs within the league, allowing them to invest in new facilities and improve the experience of matchday fans (Guardian 8th April 1991; The Times 9th April 1991). Support for the new league also took place against the backdrop of the Taylor Report which required clubs to convert to all seater stadiums. It also reflected the FA’s paranoia about the parlous state of the English national team, and the prospective loss of English talent to the Italian league (Independent 9th April 1991). The rest is history. The deal was done very quickly with the FA and the elite clubs effectively winning a power struggle with the Football League. Murdoch spied the opportunity to cement his new subscription television channel – and the Premier League was born.

It is interesting now to look back on those promises and see how much has changed. Certainly the prophesied income streams did materialise. Television and commercial sources of income as a percentage of total income have increased. Similarly average attendances did grow, from around 21,000 in 1992 to a peak of around 36,000 by 2007/8 – although some of that growth is down to an averaging effect in a smaller league. But contrary to expectations the new income did not improve the economic stability of those clubs. In fact, arguably the opposite has happened. If we were to track the total operating loss of the top two leagues after player trading and interest, but before tax this is a sector whose fundamental operating characteristics have degenerated over time.  According to Deloitte, by 2010/11 the aggregate pre-tax loss of the teams playing in the Premier and Championship combined was £569m. Similarly, although facilities for fans have undoubtedly improved, that has come at the price of escalating matchday prices, squeezing out lower-waged core, local support. 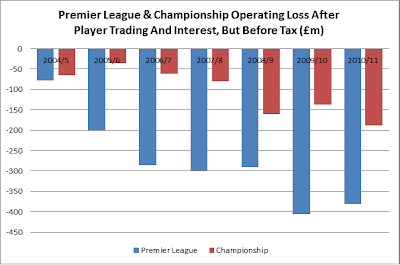 So how did this come to pass? To answer that question we need to think about the financial characteristics of the game and the governance mechanisms within which the industry is embedded.

One of the central puzzles of the football industry is why so many people seem willing to buy into an industry with secular profitability problems? Of course there are squillionaires like Roman Abramovich and Sheikh Mansour Bin Zayed Al Nahyan for whom the club is a status symbol and whose multi-million pound investments are the equivalent of the annual depreciation on our motor cars. But there are many other owners for whom the relatively predictable cashflow from the game has some appeal, even though margins are generally low or negative. Cashflow is important because it gives prospective owners the option to purchase a club with debt, giving them control with reduced personal financial commitment and exposure. Measuring the size of those debts is tricky because it often sits in one or more of the holding companies used to buy out the club, which can descend onto the operating entity to disastrous effect. The Guardian puts the net debt figure for the Premier League at £2,408.5m on losses of £205m; where interest payments account for £100m of that £205m loss. Deloitte estimates that net debt in the Championship was £720m on a loss before tax of £189m. There is some evidence that in the last 2 years debt has fallen in some cases, but the general characteristics of a levered, negative margin business remains.

But not all of the losses are due to interest payments, so are there other reasons why football clubs are so attractive to investors? When only 7 of the 20 Premier League clubs and 10 of the 24 Championship clubs are wholly owned by UK nationals, that’s an important question. Positively, they offer cachet to the buyer on an international stage and may provide an option on jackpot returns in the future. That is a very real option because each successive television deal offers lucrative revenue growth that will be capitalised in the future value of the club. Similarly a championship club reflects a solid build and sell opportunity, particularly if they can get promoted and established in the Premier League. That may partly explain why losses are tolerated in the short term. But there are other less palatable attractions. The cashflows are eminently clippable and the assets eminently strippable, so that even if the club posts losses, individuals at the apex of the club can skim cash through emoluments and other payments, dividends, commissions for interested parties, iffy sale and leaseback deals, interest payments to financing holding companies and a myriad of other mechanisms designed to get more juice out of the lemon. This is possible because the industry is notoriously opaque and riddled with complex corporate structures that inevitably reach out into the tax havens of the Caymans, Guernsey and elsewhere. This leaves the door open for all kinds of unseemly behaviour.

This last point is a central theme of CRESC's recent research: the relation between elites and the firms in which they carry out their business. In football those elites are not just owners, but also players, managers and their representatives who all place claims upon the club. The general argument that I and my colleagues make is that the growing internationalisation of revenue flows has created value skimming opportunities for well placed individuals. In football, the absence of any control mechanism – either on the corporate governance side through fan ownership or on the regulatory side through a wage cap - means that those well-placed individuals weaken the club’s financial position. Paradoxically, however, the game has become more reliant on those individuals: the network connections, particularly between clubs, managers and agents, now critically determine the access to talent which may improve on-pitch success. Those interpersonal network connections are thus both a source of revenue creation or capture and a means of securing the success demanded by fans; but they are also a source of fragility because those same networked individuals come at a price - they are, in other words, extractive too.

The outcomes of all this are very uncertain. It raises all kinds of confusion about alliances and allegiances from the fans’ perspective: who to identify with, and who or what is the problem? There is a noticeable shift in the discourse from elements of the support base, from a concern with the club as a social institution, to an increasing identification with the corporate concerns of the elites within the club. But the traffic has not all been one way. Equally there is growing resistance to the commercial representations and activities of the club – perhaps most dramatically illustrated in the takeovers of Manchester United and Liverpool, where the owners’ use of the term ‘franchise’ became an emblem against which many supporters groups mobilised. Nevertheless we see a second fragility emerging beyond the financial characteristics described above: there is an equal withering of the club as a social institution. And this fragility is in part a product of the growing influence of elite networks around the game.

New money should have stabilised clubs, but it has not. Clubs as both cultural entities and economic institutions have become more fragile and wrought with tensions as new elite networks become central to the capture and extraction of revenues in the sector. The FA’s approach to ownership is in keeping with a form of capitalism peculiar to the British, where everything is for sale provided the purchase price is right. But the game in its current form is not sustainable. Clubs as financial entities cannot continue without regular loans or other cash injections. There needs to be a countervailing force which keeps value skimming and extraction by these networks in check. Greater fan representation on the board might just provide the long-view needed to do just that.

NB: A CRESC Workshop on these and other themes will take place on Friday 17th May 2013, details below:

Friday 17th May, 10am – 4pm
University of Manchester

Posted by Manchester Capitalism at 08:28

Manchester Capitalism
Manchester Capitalism is a collective of provincial academics who publish together on financial reform, economic renewal and political mobilisation. Our output of books includes After the Great Complacence (OUP 2011) plus working papers and public interest reports, like 'Bringing Home the Bacon' or 'A Leveson for the Banks' available at CRESC.
This blog is written by individuals who are part of the the CRESC team and so reflect the different conversations, internal debates and (occasionally) the disagreements that go on inside any collective. Collectives are rare in academia and we are often asked how ideas emerge and compromises are reached in our work. This blog represents a window on that process. For that reason we write here with pseudonyms: to demonstrate the multi-voiced inputs to our output and to preserve the integrity of the collective.